A tragic loss of unique heritage, a breach of trust, a missed opportunity? Why Hornsey Holder no.1 was lost The following words are taken from a last email on the subject of Hornsey Holder no.1 from Colin Marr, the tireless champion for its conservation. We are indebted to him for all his work. If you read to the bottom of the letter, there is a short explanation of where PMRA fitted in. If, after reading all this you feel Holder no.1 should not have been lost, we urge you to look around and see what next in our heritage and unique urban landscape is threatened.

Even up until the last week in July, there was still a slim chance that Hornsey Holder No.1 would be saved by Historic England eventually agreeing to give it listed status, which would have prevented demolition. Now, as we all know, the demolition is almost complete and the battle to save it has been lost. I want to use this opportunity to summarise the ten-year campaign to try and save this important gasholder and to explain the reasons why it failed. Sorry it’s a bit of a long story! For me the story started in 2006 with my involvement in objecting to some aspects of Haringey’s development plans (the UDP), which included removing Gasholder No.1 from the local list of heritage buildings and structures. It had been on the list for many years and was correctly described as a structure from 1892 using Cutler’s helical girder concept. At the public examination of Haringey’s plan the Inspector questioned why Haringey wanted to take it off the list and seemed unconvinced of their reasons, which were to help clear the way for Haringey Heartlands. Together with other objectors, I thought we had won, but when the final UDP emerged it seems the Inspector had obligingly agreed to take it off the list.

The campaign was then directed at getting English Heritage (the ultimate custodian of listing - now Historic England, (HE)) to recognise the importance of this structure and the first submission to EH was made in 2006. Early and informal feedback from EH had suggested that we were ‘knocking at an open door’ and success looked likely, but sadly, listing was refused. Over the next ten years there were three further appeals and submissions, all to no avail. Although I have a technical background, I am not a structural engineer, but it seemed obvious to me that the 1892 guide-frame of Hornsey No.1 was a pre-cursor for other and much later geodesic structures including the London Gherkin from 2004. The more I became involved, the more important it seemed to preserve this structure and if possible see its reuse as the outer-frame of a landmark building in Heartlands. I was pleased to find that I had allies in this and that there were heritage and structural experts who were also arguing for listing. Along the way, there was also additional support from the Victorian Society, the Greater London Industrial Archaeological Society, the Association for Industrial Archaeology and local residents groups.

Looking back over all of this, I have had to question whether the outcome could have been a happy one if we had done things differently. Sadly, I think the answer is no and I think we played our cards as well as we could have done. Haringey Council was clearly in the wrong when it cynically took Hornsey No.1 off the local list, but in itself this did not condemn the structure. If the appraisals conducted by EH and HE had been objective, then I think listing would have been achieved, but I think these organisations failed to live up to what we expected of them. It is also possible that a high-level decision was taken years ago not to list structures like this and in consequence all they attempted to do was trot out reasons to defend their first decision not to list.

There are other surviving examples of Cutler’s helical girder geodesic structures, including a very large one by the railway line at New Barnet, built on the 1930s. But these are relatively late, rather large and never ever likely to be listed. Hornsey No.1 was the most eligible for retention.

If anyone would like to see the detailed submissions for listing and the formal responses, I would be content to pass them on. Sky City above the Mall

Even within Hornsey Park, over the years there was no clear view on the case for retaining Holder no.1 which is why PMRA used this website, our objection letters to the planning applications and our contacts to highlight what we saw as a failure to consider its value properly, its popularity and the loss of opportunity to create a unique landmark building next to the mainline with the backdrop of Alexandra Palace and Park, to help save it. Amongst the local community (but really not wider), at best there was a trickle of calls to keep it but lone calls wouldn't be enough. Sometimes we would hear comments along the lines of ‘I thought it was protected’ but then nothing more. In our work with the Victorian Society, we learnt the two things most likely to turn HE's position to one of supporting listing were strong and vocal local support and a clear connection with the community. We knew Holder no.1 and the coal and railway economy that supported the gas works had been a place of employment for several generations of residents of Hornsey Park and that the Gas Company had owned houses and been an integral part of our community for over 100 years but sadly there seemed nothing left of this association to point to. Ultimately, the application that sought demolition of Holder no.1 was actively championed by Haringey and too important to them for it to fail. It's therefore ironic that when approving the detailed design recently, they no longer seemed to like it quite as much. If those who spoke up for the retention of Holder no.1 were right, the area has lost an valuable heritage asset and an opportunity to develop something unique but we must move on: the Mosselle Brook is a heritage asset which we may yet be able to recover and the award winning Shopping City may yet be demolished, but not before its slow death as a centre of the community has brought a period of uncertainty and decline. Already, despite environmental, regional and local policy seeking the uncovering (some would say 'recovery' of) the brook, Haringey seems unable to do anything other than support actions likely to see this aim fail. Meanwhile, it's come up with a plan to redevelop and reconfigure the centre of Wood Green that seeks the demolition of the Shopping City - opened by The Queen in 1981 and a leader in its time, it has hardly been given a fair chance in its relatively short life.

Great changes are planned for our area over the next 10 to 20 years. In an age of community planning (enshrined in law and funded) Haringey seems unable to follow Government best practice and support community led planning. This needs to change - why not join us to help it happen.

Some more impressions of the gasholders, the Mosel and Sky City below. Please click on the images for a larger version. All photos by PMRA members. 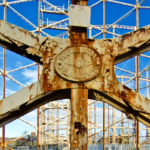 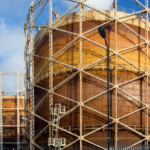 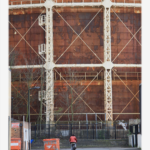 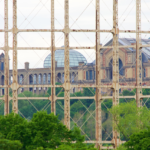 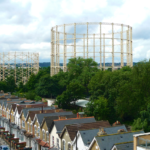 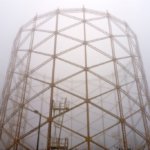 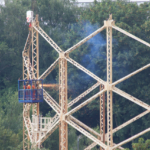 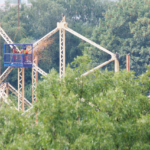 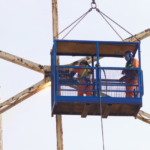 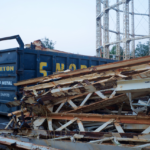 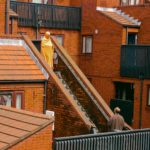 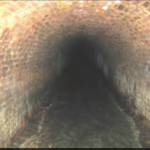 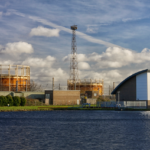 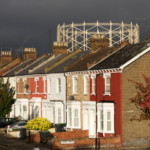 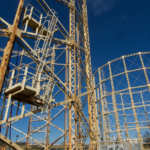 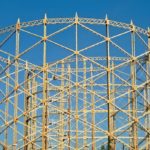 One comment on “A tragic loss of unique heritage, a breach of trust, a missed opportunity? Why Hornsey Holder no.1 was lost”