From shoot-out to buildout - Hornsey Park after the World Cup!

The postponement of tonight’s meeting with the Heartlands’ developers St William comes with an apology. Residents need to be communicating as much as possible and to lose an opportunity to do so is a real shame.

PMRA meets each month with the developers and with National Grid (who keep the minutes), the Mall, Electoral Reform Services and sometimes Haringey Council at the Resident and Business Liaison Group. 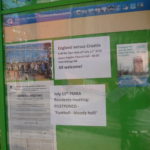 A small group of us are further involved in commenting in more detail on design proposals and on pressing initiatives of our own that we think will benefit people who live in the area. We report the concerns of local residents about the construction operations themselves.

We also make connections across the borough - we are members of the excellent Haringey Friends of Parks Forum, for example, and have joined forces with other groups to set up the Haringey Rivers Forum - which next meets in the Big Green Bookshop at 6pm on July 23rd.

At the moment we are pressing Haringey Council for a coherent transport strategy for Wood Green, one that is fairer to Hornsey Park residents. This comes on the back of our attempts to try and improve Hornsey Park Road itself, where there is too much traffic and insufficient maintenance. The new park that will open behind the lime trees presents a major opportunity to narrow the road at that point and further calm the traffic.

We are also pushing for a long overdue improvement at the corner of Martins Walk where Alexandra Road should be pedestrianised and use of the shopping city car-parks strongly reinforced.

We are currently talking to St William about the design of the park - an important opportunity to mark the gasworks heritage - and the planning requirement for them to deculvert the Moselle Brook when the water quality has improved sufficiently to permit it. The open space on the Heartlands will meet the back gardens of around 40 homes on Hornsey Park Road raising important party wall issues, including the need to harmonise security and environmental concerns.

St William have agreed to hold an informal event under the lime-trees in the near future to share information and encourage people to get more involved in talking about what happens on their door-steps.

We have good relationships with the developers and planners but we badly need more people to get involved with PMRA to lend weight to the causes we pursue and the evidence we represent.

Thanks are due to the energy and commitment of the current team: Marcus Ballard, Anna Douglas, Ryan King, Eugene McConville, John Miles and Foysol Uddin. It’s likely that the postponed general meeting will take place early in September - watch this space!