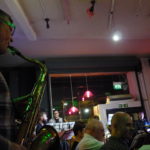 According to trumpeter Henry Lowther, who I spoke to at the Karamel Restaurant on Thursday night, the great jazz composer Mike Gibbs lived in Alexandra Road in the 1990s. I’m going to see one of his 80th birthday concerts in Dalston on Monday night when one or two Karamel regulars - including Henry (who was on Gibbs’ great 1970 album Tanglewood 63) and drummer Paul Clarvis - will be in the band.

This week another Gibbs collaborator, the great saxophonist Stan Sulzmann, brought his eighteen-piece Neon Orchestra (pictured) to the Karamel. Typically, Henry Lowther played a couple of fine solos, just as he had the previous week when Alcyona Mick and Tori Freestone brought him on stage to wrestle through Thelonius Monk’s prodigiously awkward Cross-Cross. When he isn’t leading a group of his own Henry (who played with the Keef Hartley Band at the Woodstock Festival in 1969) sits in most weeks at the Karamel: his presence exemplifies the jazz workshop modus operandi that host and drummer Stu Butterfield has established there. Stu himself plays brilliantly in several of the groups he features at the club, many of which revisit that rich period at the end of 1950s when Eric Dolphy, Charles Mingus and Monk flourished.

This isn’t nostalgia: jazz has always changed so fast there’s huge scope to explore what got left out first time, rework the classics and make something contemporary. 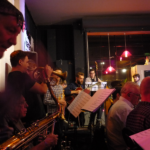 It’s difficult to understand why the place isn’t packed out each week: I’ve been listening to jazz for sixty years and never found a venue which serves this greatest of twentieth century art-forms better. Alan Barnes, Chris Laurence and Chris Biscoe are among those due to play later in the year but you’ll hear something strongly felt and richly conceived every week. Wood Green is already so much closer to the action than we think.

You really have to be there.

http://karamelrestaurant.com/events/category/music/jazz for all the details.