This meeting was called so that residents in Noel Park Ward could meet and question the people who had put themselves forward to represent our neighbourhood on Haringey council, and so that the candidates who are  seeking our vote could hear our concerns. Our ward will elect three representatives on 3 May as councillors.

Candidates were invited from the main parties.  Those who took up the invitation were : 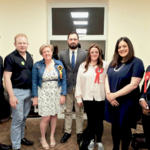 Ryan Burton King shared the meeting, All three Labour candidates and a Green candidate were present. The Lib Dems and Conservatives were represented by local residents.

All the panel members contributed fully to addressing all the questions and  the discussion was animated both  among the panel and with the audience. The main response to the issues from the panel members was a  promise to listen to the views of the electorate.   The Labour candidates admitted ‘that mistakes have been made' by the current council in having failed to engage adequately with residents. The   Labour candidates all distanced themselves from the current council and were clear that if elected they will not be supporting the Haringey Development Vehicle.

On behalf of the labour candidates Khaled Moyeed made a commitment to a new labour council setting up a Fairness Commission that will inform policy. He also stated that Jeremy Corbyn has committed the labour party to giving a right to vote to tenants where estates are proposed for change in ownership .

In the light of the emphasis given by all the panel members on listening to those they seek to represent, it is ironic that  neither the conservative nor the Lib Dem parties were able to provide candidates to listen to us tonight.

The candidates who were present all clearly noted the local issues that are important to those who live here,  and they all expressed their intentions and views with vigour and enthusiasm.

The panelists and chairperson were thanked for their contributions.