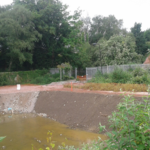 The hidden river is now exposed

PMRA has always been interested in opening up the Moselle in Wood Green, co-chair Marcus Ballard told Monday night’s meeting at the Big Green Bookshop. But, he added ‘we now know it’s viable - we know it can be done’. Marcus explained how, as a result of the drastic work required to remediate the former gas-works on the Haringey Heartlands, the hidden river is now exposed. A bank has been left to protect it within its culvert - ‘if you removed that bank, you would see the culvert; if you removed the culvert, you would see the river’. He argued that there was no flood-risk and that there was sufficient space – as never before, there was both the opportunity and the knowledge required to open up the river.

Earlier John Bryden from Thames 21 gave a brilliant account of how urban rivers can be restored. Creating a healthy river means three things: creating the habitat, having the right amount of water and dealing with water quality. 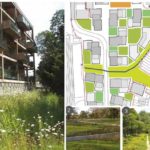 The Moselle, which rises in Queens Wood before joining the Lea, is small but it has a healthy flow. Between the railway and Mayes Road there are already extended sections where the developers must commit to respecting the course of the river culvert. The main issue, it seems - the one which particularly worries Haringey Council, is keeping the river clean after its water quality is returned to being ‘Good’ in 2019. We heard that there are, apparently two systems of drainage in our area – one for foul water (domestic waste water and sewage) and another for surface water (rainwater from roof, patios, pavements and streets). Surface water is clean enough to go into rivers. Preventing domestic waste water - and even sewage – entering the surface water drainage system from misconnected homes and businesses - is therefore the challenge. But this problem is not caused by opening up rivers but by failing to prevent future or deal with existing misconnections.

'Misconnections' was the subject of Joyce Rosser’s account of Sustainable Haringey’s work with residents associations and the programme implemented by Thames Water and Haringey Council now in progress to remedy the misconnections from domestic properties. Systems called SuDS (Sustainable Drainage Systems) had been introduced at four points along Priory Road to help clean up surface water. And, spectacularly, the Moselle has been opened up in Lordship Recreation Ground. The result is popular - as Caroline Jepson explained, even residents affected by the periodic spells when the stream there is smelly do not want to turn back the clock and lose the open river. 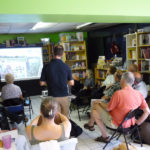 Our presentation on the Moselle at the Big Green Bookshop

Regrettably, the problem of misconnections seems set to continue or be repeated unless the council and community work together. Rachael Macdonald gave a graphic account of how she had had to challenge builders and plumbers in her neighbourhood. There is an important issue for planning, building control and inspection but, as Rachael demonstrated, we, as the community, are key to prevention but helping to make sure our builders and neighbours understand that that there are separate systems of drainage and reporting any concerns to the Council.

Disappointingly, as we learned from Marcus following his intervention at a past planning committee, the Council appears to regard the Lordship Rec scheme as a failure, when the only failure is the failure to deal with a decreasing number of misconnections upstream. But the public increasingly want to live in an environmentally-friendly and sensitive fashion. Contact with nature is good for mental health and many of Haringey’s own strategies and plans support a more progressive policy. And failing to deal with pollution comes at a cost further downstream. Thames 21’s data shows that it is not prohibitively expensive to open a river: examples from elsewhere (including Enfield and Lewisham) suggest a figure as low as £500 a metre. And developers themselves are exploiting the benefits of waterway restoration schemes. The Berkeley Group’s development at Woodberry Down was once promoted for its closeness to the City is now marketed as having the Woodberry Wetlands Nature reserve on its doorstep. Community groups agreed overwhelmingly to continue working together. Encouragingly, plans are already in place with the Council and the Environment Agency to establish a new Waterways forum in Haringey.

The meeting concluded that restoring the Moselle through Heartlands should be an environmental objective in itself but it is also an essential part of managing and preventing future misconnections upstream and ensuring its course downstream through Lordship Rec is never again polluted.

As our first speaker Albert Pinching explained records of the Moselle go back to the seventeenth century. Local residents who want to bring this history back to life in Wood Green can press St William to open up the river at a Development Forum at the Heartlands School at 7pm on June 29th.

You can find out more at the River Restoration Centre http://www.therrc.co.uk/, at Thames 21 http://www.thames21.org.uk/, at Sustainable Haringey http://sustainable-haringey.wikispaces.com/ and Tottenham Ploughmans https://www.tottenhamploughman.com/

Finally, we'd like to extend our thanks to Simon and Tim for allowing Sustainable Haringey, PMRA and Thames21 to hold the meeting at the Big green Bookshop and for their hospitality on the evening.