About us | Environment | Gardening | Parkside Malvern | Roads and Traffic

Working on the build out in May

Now the local election is settled it’s a good time to review where we are up to in the neighbourhood. In July council officers will report to the new Cabinet on the outcome of the latest consultation on the Wood Green Area Action Plan. There have been some recent successes in challenging the AAP: plans to demolish houses in Caxton, Mayes and Coburg road have been abandoned; St William have been required to cost the future deculverting of the Moselle Brook; Page High Tenants Association and SkyCity Action Group have won political support to resist the demolition of their estates; Capital and Regional have ideas of their own about the future of the Mall. On other issues - like the dreadful Austringer Capital development approved on the Iceland site - resident opposition has been less effective. We’re at a point when resident groups and voluntary organisations affected by the Action Plan should get together to thrash out a common agenda. Haringey Council has offered to host such a meeting.

At the PMRA Hustings on April 18th there was a great deal of concern about traffic management - where will the traffic generated by the development process and the new homes and businesses actually go? There was also anger about our scraggy street environment where progress is painfully slow. The Community Streets project is still not completed. The sunken trench in the pavement at the southern end of Hornsey Park Road and the dilapidated northbound kerb opposite have received no attention. 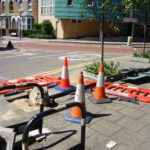 Not much has changed here since early April

The road surface is breaking up once again near the Shopping City and a road sign knocked over at the entrance to Mayes Road has lain unrestored for two months. It shouldn’t take the scrutiny of councillors to sort such things out but our newly-elected members have got plenty to get their teeth into if they want to make an impact. (And credit where it’s due - the dreadful clanking drain lid outside 25 HPR has at last been fixed!) One issue where we want the council’s involvement is at the top end of Alexandra Road near Martin’s Walk. The Mall have already indicated their concern at its sometimes foul and bleak condition. We might interest our neighbours at Sky City in trying to access funds through the Noel Park Big Local where they are a partner.

On a brighter note our own work has been looking good. Despite the urban stress all our planted areas are looking nice - even lush. The new lavender plants are bulking up while the replanting of the little garden beside Umoja House has been a big success. For the first time we’ve had an English bluebell flowering under the lime trees. Sadly, we’ve lost the holm oak we tried to move from the lavender garden in the autumn. But the planters and trees installed on the Hornsey Park Road build-out look good - thanks here to borough engineer Gary Smith, council tree-man Alex Fraser and to the Council’s nursery at Finsbury Park for the plants we put in on 5th of May. Biodiversity was the theme of a recent meeting with the borough’s newly appointed Conservation Officer, Ed Santry, organised by the Friends of Parks Forum: PMRA hope to meet him soon and engage him around our vision of Wood Green as a living environment. 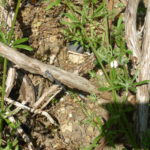 Under our noses wildlife is already rich and diverse: chaser dragonflies already out and about, long-tailed tit chicks and blackcaps at the back of Hornsey Park Road, what looks like a white-winged damselfly in the lavender garden, the scented flowers of the false acacia tress in Caxton Road.

There’s a lot of work ahead. We’re still guardedly optimistic about our relationship with St William over the former gasworks site. Ashley Spearing, with whom we made good progress discussing the Heartlands/Hornsey Park Road borderline a couple of years ago, has moved on. Farewell and warm regards to him. The new senior development manager Matthew Rees has suggested we become involved with the conservation efforts around the earth bund behind the Iceland car-park. What will count in these negotiations is whether we can develop the clout to be a ‘stakeholder’. We have ideas but we don’t have money. We have credibility but we need a larger, stronger team. Why not get involved and help put your mark on our changing neighbourhood?