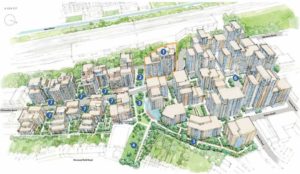 The meeting was attended by 25 residents and 4 speakers from St William who are developing the former gasworks site currently known as the Heartlands. The speakers each gave a presentation about their work and they all answered questions. 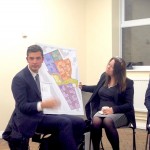 The first blocks will be erected near the railway and the aim is for occupation to begin in November 2020. National Grid expect to have completed their gas pressure reduction building by December 2018. The central parkland feature between the railway wall and Hornsey Park Road will be completed at the same time as the first blocks.

Mary Neuner Road will be replanned and the S bend softened. Negotiations between Haringey and Transport for London will decide whether a bus route will be provided.

The development has no street parking and underground parking for only 400 vehicles. St William are committed to a high standard of design for Mary Neuner Road, including raised areas for speed reduction and the same will be provided for the area of Hornsey Park Road adjacent to pedestrian access i.e. through the lime trees, which will remain.

The park will be a public space with children's play area, seating and a water feature. It will be maintained by St William.
The development consists of 33% affordable homes, which are a mixture of 1,2, and 3 bedroom flats rented and managed through a housing association, and flats for part rent/part buy.

The second stage will begin building in the north of the site in April 2019. Detailed plans have not yet been submitted. This will be a dense development with possibly a 19 story tower block. There will also be commercial development including a children's nursery, a cafe/community centre and possibly a health centre. 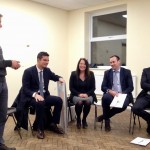 The development will take 12 years to be completed. At peak, there will be 600 workers on site. Haringey require a quota of employing local contractors and labour and apprentices. Cladding material used will be non-combustible in accordance with expected legislation
St William will pay £33 million to Haringey for this scheme.
A further information meeting with St William team will take place under the lime trees on Saturday am 17 November.

After some discussion about tactics to secure de-culverting the Moselle the meeting ended.