The Heartlands at September 2017 and the RBLG

This month’s meeting of the Heartlands Resident and Business Liaison Group (RBLG) was courteous and informative. The Group enables local residents to hear about progress on the site and gives us a voice in discussing with the developers their plans and proposals. Generally three PMRA representatives attend and this month there were five. We started with a productive conversation about the recent experience of vibration from the works affecting residents at the southern end of the site on Hornsey Park Road. The National Grid engineer, Phil Harrison, who works for Atkins, had brought their measurement data for the year. 10mm/second is the British Standard where ‘cosmetic damage’ to property is an issue. The records showed this to have been breached on only one day with workings close to the railway line. But our neighbours closest to the site reported a level of nuisance during mid-summer which the data could not account for. It was recognised first that the monitoring devices are not particularly close to the relevant back gardens and then that the disturbance might reflect the impact of breaking out unexpected obstacles underground (like old iron gas mains) in the course of preparing the way for the new gas supply. The site managers agreed that better communication - including residents reporting promptly - will be important in future.

We also heard a convincing account of the thorough precautions taken while removing the asbestos abandoned on site over forty years ago when detritus from the dismantling and demolishing at that time was dumped in the pit of former gasholder no 2. The meeting was then given advance notice that, during the autumn, Mary Neuner Way will again have to be closed selectively - important for Electoral Reform Services to plan in advance of next year’s local elections - to permit excavations to go forward safely when National Grid’s contractors install the new gas main underneath the Moselle Brook culvert. As ever, this is when tensions arise in the discussion: it has become obvious for some time that Haringey has known since they built Mary Neuner Way in 2009 that the Moselle is quite close to the surface. It is therefore not too deep to open up as they, National Grid and the developers have insisted. Had plans to deculvert Hornsey’s only river been required as part of the planning consent in 2012 we would not now be fighting a rearguard action against Haringey and St William to get these obligations recognised and implemented. 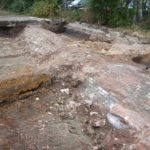 Moselle culvert exposed by Haringey just below the surface

The second part of the RBLG meeting, which is chaired by PMRA and supported by St William (while National Grid remain in attendance), has a more informal and less structured agenda. It was confirmed by St William that in the spring construction work will start on C7, the first block of housing next to the railway by the bend in Mary Neuner Way. Ashley Spearing explained that St William will be unlikely now to submit the planning application on which they have just consulted before Christmas. While PMRA supported their last application - for the C7 block - it is difficult to see how we can support the next. We appreciate the effort and inventiveness St William have put into redesigning the Heartlands, proposing improved open space and through routes and reducing the intrusiveness of the blocks closest to Hornsey Park Road. But much of this will be cancelled out by the pressure from Haringey to help speed up delivery of other parts of the Wood Green Area Action Plan and achieve the greater densification of housing which requires unacceptable building heights near the Penstock Path. St William also updated us on plans for the temporary use of the premises they now own on the Olympia Trading Estate. Some of these plans are imaginative, some are less so, but again their usefulness is undermined by the loss to Haringey of Turnaround Publisher Services, a good neighbour and well-regarded employer who are having to vacate and move to Hertfordshire.

A good feature of these recent meetings - apart from the opportunity in June to make our feelings known to Austringer Capital about their horrendous proposals for the Iceland site - has been the opportunity for direct dialogue with Andrew Haughey, the representative of Capital and Regional who own the shopping mall which is threatened with demolition under the Wood Green AAP and whose plan to establish Aldi on the corner of Mayes Road and Caxton Road the Council has rejected. Here we took part in informative discussions about investment plans, criticise the priority allocated to car-parks, and consider their quite radical proposals for the existing fabric of the Shopping City. Contrary to the Council’s claims to be acting in line with our views these conversations seem much closer to the spirit of what people who live locally want to see: that is, real plans for change in the area as it actually exists. PMRA would welcome the Council’s re-engagement with the Heartlands Resident and Business Liaison Group - a real achievement of National Grid’s and St Williams’s engagement in the area over the last three years. If you live locally now is the time to swell the numbers of our association and build its voice - look out for details of the forthcoming AGM.