The lime-trees are a-changin’ 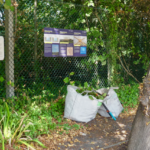 We were out on Saturday watering and clearing up. You may have noticed the new lighting the Mall have installed under our second mural beneath Sky City.

They’ve also put in a second tap to help us with the beds and planters close to the zebra crossing where Hornsey Park Road and Mayes Road meet. Meanwhile Ryan and Polly got some nearby children watering the cherry trees on the Hornsey Park Road buildouts.

We’ve also - perhaps for the last time - cleaned up the fuzz that grows around the boles of the lime-trees by the old gas works entrance. From next year St William will take over the management of these trees (for which Haringey made tree-protection orders in 2007) and redesign the whole area for the new park on the Heartlands - they’ve recently written to residents advising us of this and we’re planning to host an open air meeting where they can go over their plans in more detail.

They’ll be putting in a temporary salesroom next to 123 Hornsey Park Road while they landscape the park. They’ve agreed to keep a small number of the scrubland trees which have grown up inside the fence over the last thirty years. 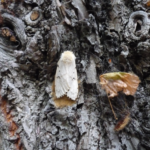 Magnificent moth on a lime-tree trunk

This has been such an under-appreciated patch - for the most part its only dogs and children who ever walk the lime colonnade. It’s such a peaceful home to robins, wrens, blackbirds and starlings - and, in the winter, goldcrests.

On Friday we found a bulky moth (perhaps a puss moth) - it seemed to be sleeping in the heat but has since sadly died.

To celebrate the attention we’ve given the lime-trees over the years - keeping it clean, removing leaves and twigs, trying out small patches of shade-planting and removing litter - we’ve reinstalled our activity notice from July 2014. At that time the idea of a local park was just a proposal.

It’s a triumph all round that St William accepted the case and included it in their future plans.